While I can’t provide any real tangible progress on the farm for the past few months, I have been busy with the details of planning the renovation. Anyone who has been to my home recently can attest to the fact that my dining table looks more like a designer’s studio than an eating surface….

But, let’s back up a moment and let me explain how I got to where I am.

Home Style
After researching the style of my home, I discovered that it fits the nomenclature of Folk Victorian. That descriptor really doesn’t mean much except that it is a farmhouse that was built during the Victorian era, a period that spanned 1870 to 1910. From what I could find, unlike Victorians that were designed by professional architects for well-to-do citizens, Folk Victorians were usually designed by the same people who built them – the homeowners and/or carpenters. What distinguishes them from any other farmhouse is that they may incorporate some of the elements of the Victorian home that were now being mass manufactured and, more importantly, shipped by train to areas farther away from city centers. Some of these elements could include flat, jig-saw cut, trim or gingerbread on the façade or porch, turned porch spindles, bright colors, and decorative gable-end detailing, as a sampling. Window production had progressed to a point where large panes of glass could be manufactured so the once pandemic multiple-paned windows were no longer used and, instead, one finds two-over-two or one-over-one sashed windows. The Folk Victorian, however, is always a simpler style since these homes were still ultimately built as basic shelter for the common folk.
Ironically, Victorian is my least favorite architectural style. I’ve always found the frou-frou too excessive and busy. But, I also feel like a home’s décor should coalesce with the home’s overall style. In my humble opinion, walking into a mid-century modern house with traditional furnishings is an affront to the senses. It makes me uneasy. I want my home to be my sanctuary so I will be incorporating some of the simpler details of the Victorian era to keep the styles consistent. But, mostly, I intend to focus on farmhouse simplicity as that most closely fits my personal style. It will definitely be a balancing act for me. That being said, I’ve spent months refining and then tweaking my plans.

The Plan
Part of my challenge is the orientation of my home on the property. Originally, the rear was the front and vice versa. Where the rear deck is now, once stood the original front porch. And, according to the history provided to me by the previous owner, the patio doors were once the location of the front door. What I found I needed, over the past year living here, is a proper foyer and better layout of the half bath, coat closet, laundry facilities, and master suite.
With those things in mind, I decided that I am going to enclose the current front porch to create a foyer and add a new front porch across the entire front of the house. While making that change, I’ll update the roof line over the porch to better identify that as the front of the house. Next, I plan to build an enclosed breezeway between the house and the garage to allow for getting to and from the house in inclement weather.
The largest part of the renovation will be the rear addition. I’m going to demolish the existing deck and build a two story addition in its place. Essentially, the intent is to appear as if I enclosed the original front porch and what could have been a second story sleeping porch (which was commonplace in Victorian era homes). The first floor of this addition will house the relocated half bath and laundry facilities and will be the mudroom from the house to the yard. The second floor of this addition will house the relocated master bathroom – complete with clawfoot tub – and new walk-in closet. A new deck will be built off of the addition.
Instead of building a separate home office, I’m going to use the space where the current half bath stands now and create a built-in desk area. Then, the rest of the house is getting an up-to-date facelift. A kitchen renovation is on the plans as is the main bath renovation. New paint, flooring and light fixtures will be installed throughout. All of these changes are being made with an eye and mind to the simplicity and style of a farmhouse built in the Victorian era. 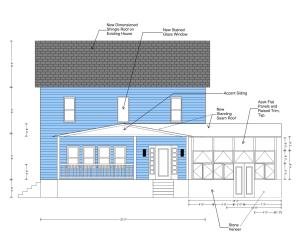 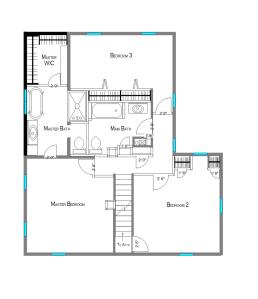 Schedule
Until I can claim my lottery winnings, I am going to have to do this work over several months and years. Part of the planning is phasing out the work. In the meantime, I will be continuing to make the existing home fit my tastes as best as possible without spending unnecessary monies in the process. I’ll keep posting the progress as I go. My last home which was a foreclosure fixer-upper took me ten years to complete. My goal here is to finish in less than that time frame.

But, for now, if you’ll excuse me, I need to ruminate over Bedroom 3 fabric swatches and try to find a wood floor that makes me happy!